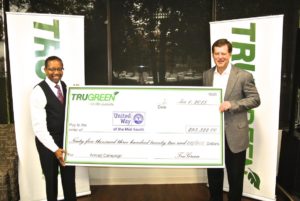 In celebration of #GivingTuesday, TruGreen announced it has pledged more than $95,000 to the United Way as part of its annual fundraising campaign this year, with most of the contributions coming directly from employees.

In three weeks, TruGreen employees donated more than $63,000, exceeding their $60,000 goal. The company’s exceptional fifty-cents per dollar matching program helped create a grand total of more than $95,000 for United Way this year. 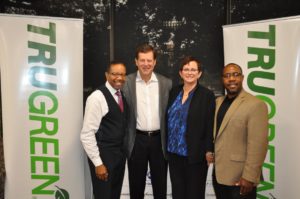 “We have amazing employees at TruGreen and this recent fundraising campaign for the United Way once again proves it,” said TruGreen CEO David Alexander.

“As an organization, we have created and fostered a culture of giving back, and our employees demonstrate that commitment by making positive impacts in the communities where they live and work. Every year, I’m thankful for the generosity of our team. This year we raised an impressive amount of funds in a few short weeks, which will directly support the good work the United Way is doing around the country.”

This is TruGreen’s second United Way campaign, which has raised more than $180,000 in two years to support United Way’s work of positively impacting education, income / financial stability, and health across the Mid-South to improve people’s lives. TruGreen also performs volunteer Service Days when employees work with hands-on projects in our community, and has a very popular Lawn Stars program which awards high-performing branches with a $2,000 donation for the nonprofit of their choice. 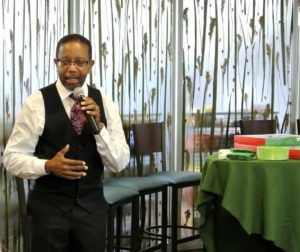 Dr. Robinson thanks TruGreen employees for their generosity and hard work.

In a special #GivingTuesday celebration, Dr. Kenneth S. Robinson, the President/CEO of United Way of the Mid-South, accepted a check from TruGreen at the company’s corporate headquarters in Memphis, TN.

“Partnerships with companies like TruGreen, which rallies incredible individual employee support, make an enormous impact in how the United Way is able to help communities in times of need,” said Dr. Robinson

“TruGreen has exceeded fundraising goals year after year and we’re looking forward to what we can continue to achieve together.”

(Note: Staff from TruGreen’s communications departments contributed greatly to the development of this story and its photographs. We thank them for their hard work for United Way and our Mid-South community.)