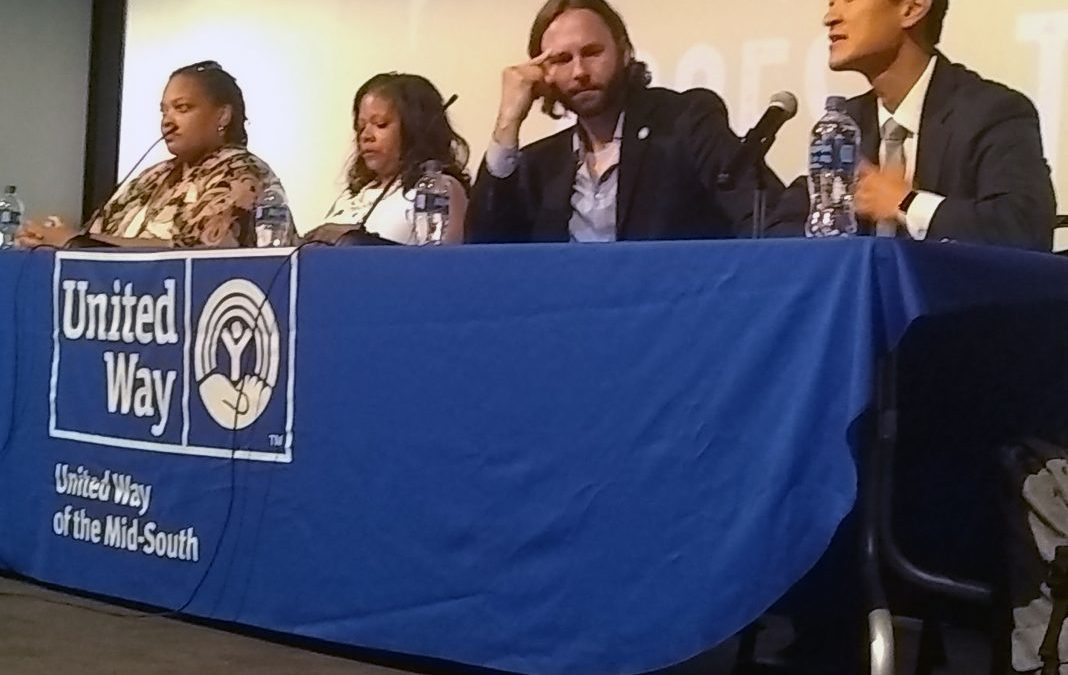 The MLK50 commemoration continues with United Way of the Mid-South’s “Poverty Unplugged” series. The second installment Tuesday evening at the National Civil Rights Museum explored some thought-provoking strategies in battling low performance in the classroom.

Four panelists, led by moderator Dr. Charles McKinney, touted old concepts and introduced new ones to address “Access To Education,” the second of three panel discussions related to poverty in Greater Memphis. All four agreed that the presence of more African-American males in the classroom could be a turning point for African-American males.

Shante Avant, deputy director of the Women’s Foundation for a Better Mid-South, suggested that “the best solutions actually come out of the troubled community.”

Tami Sawyer, managing director of Diversity and Cultural Competence, spoke at length about the benefits of having black men in a predominantly black school system.

“Mayor Bill de Blasio in New York has actively recruited black males to teach,” said Sawyer. “That is a great model for us. In Memphis, one in three black males will be in the criminal system by the age of 18. But data shows that outcomes are greatly improved when black boys can see people who look like them teaching in the classroom.

“Every day, they see that success can actually look like them,” Sawyer said. “Black boys come in with unique experiences, experiences that black male teachers can understand and relate to.”

‘There should be more teachers that look like us because when my children have a Caucasian teacher, there have always been problems. (Two of my sons) have for years been labeled ADHD. But it turns out they were misdiagnosed.’
— Bobbie Felton
Parent

The event’s highlight was an unscripted moment when a call for comments from the audience gave Bobbie Felton a few moments to speak.

“I think there should be more teachers that look like us because when my children have a Caucasian teacher, there have always been problems,” Felton said. “I have five children; four of them are boys.

“My boys are six feet tall and the school required me to take them to therapy. They have for years been labeled ADHD. But it turns out that two are actually dealing with other mental issues. They were misdiagnosed.”

Her voice cracked and she paused to fight back a surge of emotion. A man sitting a couple of rows behind leaned forward and gave her shoulder a reassuring touch.

Members of the panel followed up Felton’s remarks by acknowledging her pain and apologizing for what she had gone through.

Dr. Danny Song, Believe Memphis Academy founder, said teachers in the classroom should look like the community they serve.

“We need to change what we feel is possible,” said Song. “As a continuation of MLK50, the question must be asked of each of us, ‘What are you doing for others?’”

Mark Sturgis, executive director of Seeding Success, expressed that social services must be a part of the classroom experience for youngsters.

“Family services should be integrated into the classroom,” said Sturgis. “All of the systems in place to provide assistance, how do we align them with the education system to serve students?”

Other points discussed by the panelists included:

● When 40 percent of students live below the poverty level, many of the schools in the system maintain failing standards. That number is 80 to 90 percent in Memphis.

● Poverty and racial injustice color the lives of black and brown children.

● Early childhood education prior to kindergarten is lacking in the local school system.

● We must accept that educational spaces are violent for at-risk children.

● Teachers must be prepared to address social issues when dealing with impoverished children.

● There is an inextricable relationship between poverty and racism.

● Real solutions are needed for “opportunity youth.” These are young people between the ages of 16-24, who are not in school and not working. There is an estimated 30,000 opportunity youth in the Greater Memphis area.

(Poverty Unplugged will present its third and final panel discussion on Oct. 2 at 6 p.m. The topic is “Fair Wages and Quality of Jobs.” For more information, call 901- 433-4300.