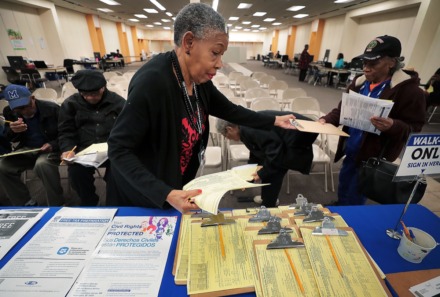 This is where he’s come the past three or four years for free help in filing his taxes instead of paying at least $100 to a tax-prep business.

“I just happened to be in the mall one day and saw this place and I talked to one of the ladies about it,” said the 78-year-old former employee of the Shelby County Corrections Center. “She was telling me it’s a free service and they will help you.

“When you get older like me, you need personal help just filling out papers and all that. I just got sold on it and tried it that one time and have been coming ever since.”

Blackledge was smart in going to one of United Way’s 17 stationary Free Tax Prep sites this week.

“Probably next week the line will wrap all the way around,” Karen Smith-Clark said, pointing down the corridor of the Whitehaven mall.

She knows from experience what happens once those W-2 forms start rolling in; Smith-Clark has been a Free Tax Prep site coordinator more than 15 years.

This is the 17th year United Way of the Mid-South has partnered with the IRS in the Volunteer Income Tax Assistance (VITA) program.

That kind of income includes a lot of people, not just the impoverished.

“It’s not just for the elderly or low to moderate income,” said Laura Russell, communications and marketing director for the United Way of the Mid-South.

The service could typically be used by full-time and part-time students, waitresses and waiters, young professionals, entrepreneurs, freelancers, anyone who earns less than $56,000, Russell said.

Slowly but surely, the number of local taxpayers taking advantage is rising.

For example, from 2004-2010, the local United Way program prepared an average of 4,800 tax returns each year, claiming an average total of $7.6 million a year in refunds.

In addition to tax refunds, the service during that period also helped qualified residents get an average of $1,400 in earned income tax credits. That’s the benefit for working people with low to moderate incomes.

In 2016-2019, the nonprofit agency prepared an average of 10,220 tax returns annually and helped residents get back an average total of $12.7 million a year in refunds. The average EITC amount was $2,500 for those four years.

In 2019 alone, Free Tax Prep helped Memphis-area residents get more than $14.4 million in refunds and $4.5 million in earned income tax credits. The average refund was $1,300.

Despite doubling the number of Memphis-area residents who come for free help, the Free Tax Prep program is hardly scratching the surface.

Between 125,000 and 300,000 people who are eligible for EITC live in the United Way of the Mid-South’s eight-county area: Fayette, Lauderdale, Shelby and Tipton counties in Tennessee; DeSoto, Tate and Tunica counties in Mississippi; and Crittenden County in Arkansas, said Phyliss Fickling, United Way of the Mid-South’s director of community impact-financial stability.

Taxpayers paying businesses to prepare the documents spend an average of $400 of their refund or EITC money to the tax prep businesses, Fickling said. But since the EITC payments can be as high as $6,000 to $10,000, the money paid to tax-prep businesses can be over $1,000.

From what United Way volunteers hear from their clients, Fickling said taxpayers pay a tax-prep business for one of several reasons:

Blackledge, the retiree, offered another reason why some people he knows prefer to pay.

“They think if they pay they are going to get more (money back), but they are not,” Blackledge said just before taking his documents to a United Way volunteer.

“They think those (paid) people are going to work harder, but these people work just as hard. … They don’t quite understand that this is a real good service,” he said.

Nearby, Contina Johnson waited her turn in the mall space previously occupied by a Cato fashion store. This is the third year Johnson has used Free Tax Prep.

“It’s been real helpful because they are not taking anything out” of the money she receives from the IRS, Johnson said. She had been paying about $450 for tax prep services.

“It’s professional,” she said of Free Tax Prep. “They do everything accurately.”

To make an appointment or to get the most current information about Free Tax Prep locations, residents can call 211.

Anyone interested in receiving the training and volunteering can sign up by calling United Way at 901-433-4364 or by visiting uwmidsouth.galaxydigital.com/need/?s=1&need_init_id=323.