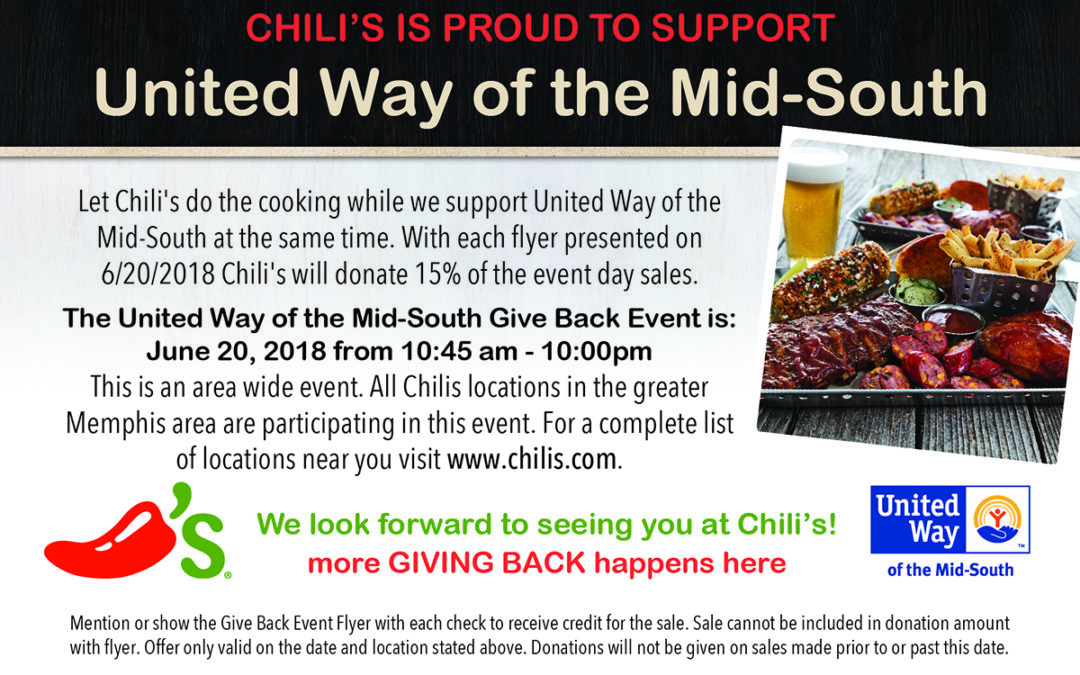 To support the mission and vision of United Way of the Mid-South, Memphis – area Chili’s will be donating 15% of proceeds and sales to the non-profit organization on qualifying purchases made on Thursday, June 20, 2018

“With school and kids being out for summer vacation, there’s no better time and easier way for individuals and families to make a difference and have an impact in the work we’re doing than joining us on the 20th,” said Stephanie Brockway, Director, Major Gifts at United Way of the Mid-South. “This amazing opportunity with Chili’s can help us reach our year-end goal and continue to fund and support the programs in our community that are on the front lines of helping people who live in poverty reach their dreams.” In order for the United Way of the Mid-South to receive 15% of every purchase, restaurant patrons must:

Fliers can either be printed or presented via cell phone.

“This fundraiser is so important because the United Way of the Mid-South relies on community support and fundraisers like Chili’s Giving Back event to drive our work to reduce poverty in the Mid-South” said Brockway.

About United Way of the Mid-South
For 95 years, United Way of the Mid-South’s mission has been to improve the quality of life for Mid-Southerners by mobilizing and aligning community resources to address priority issues in the areas of education, health, and financial stability. In 2016, Dr. Kenneth S. Robinson, M.D., President and CEO, announced the organization’s top priority in addressing Mid-South poverty. United Way’s work in education, financial stability, and health brings about positive changes in local poverty as the organization aligns our funding, initiatives, partnerships, and programs in ways that help more people escape poverty.