From the Archive: "All on the same team" – City of Memphis employees work together for United Way campaign 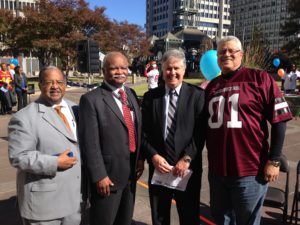 City of Memphis employees held a United Way campaign kickoff outside at City Hall plaza downtown, as dignitaries and city employees gathered to work together to help our community.

George Little, Chief Administrative Officer and coordinator for the city’s United Way drive told the crowd of employees that their theme is “teamwork.” Employees wore the jerseys of their favorite sports teams in collaboration with the theme. Leaders of the drive are focusing on increasing participation in this year’s effort. Gifts to United Way come from employees who donate from their paychecks throughout the year.

United Way General Campaign Chairman Charlie Maxwell thanked employees for their long history of support and City Councilman Myron Lowery also spoke about the importance of working together for our community. 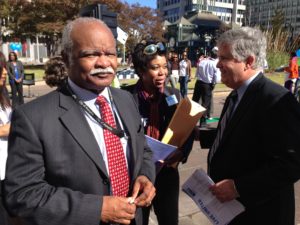 Speakers noted that year after year, the Mid-South has been a leader in charitable giving across the nation.

“In spite of the many challenges we have faced in city government, we haven’t given into them,” Little said. “We have also met the challenges of giving back to our community.”

Little said that for many of us living in the Memphis and the Mid-South, United Way is not just another charitable campaign because, “we have loved ones, parents, or children that are receiving some sort of care from United Way. We ourselves never know if we will need the services that United Way provides.”

“You all are wearing blue jerseys, red jerseys, gold jerseys or a United Way t-shirt, but we are all one team,” Little said. “This is a party, but it does have a purpose. We are going to be following up with you. I encourage you to encourage your co-workers, friends and family to support the United Way campaign.”

“Just this year, $100,000 has been contributed by your Leadership Givers that have stepped it up – and we are sure thankful for that,” Maxwell said. Leadership Givers donate $500 or more to United Way in a single year.